Showing posts from October, 2009
Show all

You should watch Engadget Show with Steve Balmer

October 29, 2009
I watched the show the other day and came away really impressed. I hate to admit but I actually liked Steve somewhat. He was soft of honest and funny about Microsoft. He talked about Windows 7, Zune, Windows Phone, XBOX and other stuff Microsoft is busy with. It was a good interview. No chairs were harmed during the filming of the show...
Post a Comment
Read more

October 29, 2009
I picked a great day to fix my dual/triple booting problems. For the past two days, I was having problems with reinstalling OSX 10.6 due to partitioning and repartitioning. Finally, I stumbled upon a tip to reset my PRAM. That worked and I described the steps in my previous articles. Today in the morning I reset my PRAM, reinstalled OSX, applied the latest Time Machine backup and then installed Windows 7 64-bit with Bootcamp. Then I downloaded Ubuntu Desktop 9.10 ISO from the Ubuntu site. Burned it to CD and then booted to it pressing "C". Ran the usual install, during partitioning I chose the following: advanced settings resized bootcamp to allow for free space gave 8gb ext4 partition and assigned to root 2gb swap partition the rest ext4 for /home ext4 8gb / 2gb swap ext4 /home When it finished installing, I rebooted (I installed refit earlier) and chose the Windows partition. Once picked, grub appeared. Picked the first in the list, which was Ubuntu and then I was in.
Post a Comment
Read more

October 29, 2009
We are very lucky to have System Center Operations Manager in our shop. I can easily access tons of information that is typically hidden from DBA. At some point, I was able to find this strange phenomenon. One of my servers had low disk space and I started researching this. Turns out, msdb grew to 16gb. I started looking into this problem and found a table with a name Apex in msdb database. The table alone was 16gb. I googled the named of the table and found out that this is a log auditing application. It was removed awhile ago but add remove by itself won't cut it. There are server-side traces and events enabled as well. The funny thing is that this application is only installed on one node and not the other. Extended Stored Procedures were called every time SQL would start on this node. I followed instructions I found on Google to remove the extended procedures, DLL, exe and some left-over stored procedures, then I truncated the table and deleted it. My msdb is now 35mb. Whew. W
Post a Comment
Read more

October 29, 2009
Windows 7 launched on October 22nd and that's about the time I got my 64-bit copy. First thing I wanted to do was install it on my MacBook Pro. I started up Bootcamp and began to repartition. I ran into a problem partitioning more than 40gb volume. I started researching the issue and it turns out that due to fragmentation, it won't allow for larger space. Yes Macs also suffer from fragmentation! I had two options, purchase software to defrag the hard drive or do a fresh install of Snow Leopard. I opted out for #2. I erased my drive, formatted it and within an hour I had a brand new installation. Then I restored from Time Machine backup and my machine went back to the exact way it was when I began, minus the fragmentation. I must say that Time Machine is an amazing piece of technology, even though I've heard otherwise. I created a few partitions, one for Windows, one for Ubuntu 9.10 (coming shortly today!!!) and one for Data (partition formatted in FAT, accessible by all thr
Post a Comment
Read more

October 21, 2009
I am catching up with blogging today and I need to take a screenshot of my screen. I have a Macbook Pro with Ubuntu in a virtual machine. There is no printscreen button and a quick search returned "Apple + Shift + 3". Mac fanboys think that's easy and better than PC? So here's a problem. If you want to take a print screen in VM, that key combination doesn't work. What do I do besides opening the screenshot application and doing it half-assed way? I am sure you can edit key bindings but that should not be that way. If you know of any other ways, let me know.
Post a Comment
Read more 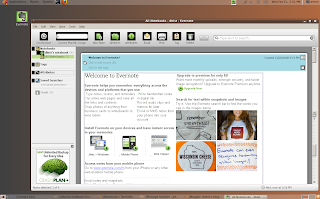 I used to be a big user of Google Notebook. I loved this product and needless to say when Google decided to scrap it, I was pretty bummed. Fortunately, there is another product called Evernote. It is pretty much the same type of web application but it also has a desktop front-end. Evernote has apps for Windows, OSX, iPhone and Palm Pre. However, there is no Linux client, other than the web application... Until now. I heard about this tip from the Fresh Ubuntu Podcast, who in turn got it from Leo Laporte on Floss Weekly. So here it goes: 1. Download Evernote 3.1 Windows executable from their website. 2. Install wine1.2 package from the Ubuntu Repositories. "sudo apt-get install wine1.2". 3. In Terminal type "wine Evernote*.exe". That's it and it works fine.
Post a Comment
Read more
More posts