November 11, 2014
DISCLAIMER: I do not offer any warranty for the below provided code, run at your own risk!!!

Turns out I jumped the gun on the whole python script inside Oozie, it is absolutely possible, it's just in six hours of trial and error, I haven't found a solution yet! Oozie is at it's best, drains my life's blood and sanity. Either way, the shell script will work and it's been running fine for me for the last week. The Python script works on it's own but in the confines of Oozie, it doesn't know where the executable is. If you can get subprocess.Popen to work, shoot me a comment, I will greatly appreciate it.

I have a love-hate relationship with Oozie. Truthfully, it's more hate than love though. Consider scenario, you need to create time-stamped directories, there are no built-in expression language functions available to just do it out of the box. You're forced to come up with all kinds of hacks to get what you want out of Oozie. What I used to do was, create a shell action calling a shell command to generate a timestamp:

then in the workflow, I'd do this:

and later in the workflow:

but what if you have requirement to create time-stamped output path within your mapreduce code, like monthly, quarterly, yearly, bi-yearly, etc and then within those directories, you'd have child directories, for example the final path would be: 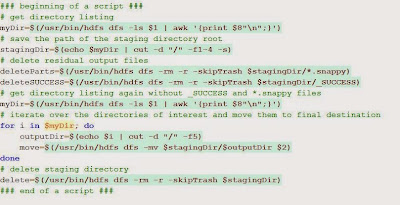 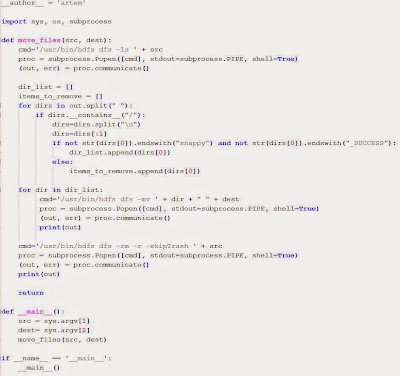 Popular posts from this blog

January 03, 2020
Today, we’re going to explore CDC capability in CockroachDB Enterprise Edition using Minio object store as sink. To achieve this, we’re going to reuse the compose file from the first two tutorials and finally bring this to a close. Without further ado
Read more

I've been an avid user of VirtualBox for a long time! Much of what I've learned in my career had something to do with VirtualBox. I do all my testing and new tutorials in VirtualBox, I use Hortonworks Sandbox VirtualBox image for my work. This is probably not a new feature but it is definitely new to me because I just noticed it, VirtualBox has an option to run in different modes, at least from the GUI perspective. I know there's a lot of untapped potential in using the VBox CLI but I haven't had much need for it yet. Back to the topic, you can now launch your VMs in headless and detached modes right from the GUI! Usually, when I launch a VM in normal way, the VM window just hangs there and is pretty annoying. I prefer to SSH to a running VM from a console instead of using the VM window. Now I can launch a VM in headless mode and it's business as usual. No extra windows, and I bet the memory toll on my machine is also smaller. When you click on start your VM, you no
Read more

December 24, 2019
This is my second post on creating a multi-service architecture with docker-compose. This is meant to be a learning exercise and typically docker-compose is used to set up a local development environment rather than a production-ready set up. I regularly, find myself building these environments to reproduce customer bugs. For a production-specific application, refer to your platform vendor documentation. At some later time, I will cover Kubernetes deployments that can be used as a stepping stone for a real-world application. Until then, let's focus on the task at hand. We're building a microservice architecture with CockroachDB writing changes in real-time to an S3 bucket in JSON format. S3 bucket is served by a service called Minio. It can act like an S3 appliance on premise or serve as a local gateway to your cloud storage. Let's dig in:
Read more