July 15, 2007
Today, I had a pleasure installing Ubuntu Server edition on my friends'/cofounders' machine. I was using this tutorial. All we had to go with was a box missing a CDROM and HD. My friend had an HD but was missing an optical drive. So while he was buying one I was getting familiar with the tutorial. The cool thing about the whole process was that he was missing a monitor and it was a hassle to dismantle his desktop. He suggested we use his 50" Plasma TV. It worked out pretty well. We used the S-Video output to connect the machine to his TV. The whole installation is fool-proof. We ran into some gripes when we were trying to install Java 1.5. It all could've been avoided if my man had a spare mouse (the only mouse in his house was wireless, and also a pain to take out). So enabling LAMP server is a one click process. Literally 15 minutes later we had a server with no GUI.

this updates the system to the latest configuration available

this installs KDE front-end so that once in a while we won't need to mess with terminal.

This server will eventually become a server for ideAjax. This is a small company of close friends which I am a part of. I also write on that blog as well. I chose to separate one and the other due to the specificity of this blog.

So last thing I did was install synaptic package manager (I know there's adept for KDE but I prefer synaptic for Gnome). I can't wait to dwelve deep into the innards of the server again. This was the most productive day in my ideAjax history. I love it and please start using Ubuntu. It will change your life. 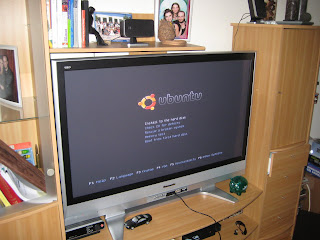 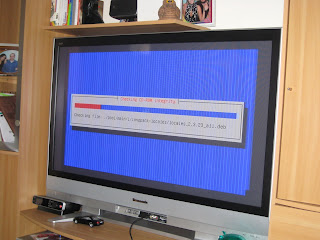 Popular posts from this blog

I've been an avid user of VirtualBox for a long time! Much of what I've learned in my career had something to do with VirtualBox. I do all my testing and new tutorials in VirtualBox, I use Hortonworks Sandbox VirtualBox image for my work. This is probably not a new feature but it is definitely new to me because I just noticed it, VirtualBox has an option to run in different modes, at least from the GUI perspective. I know there's a lot of untapped potential in using the VBox CLI but I haven't had much need for it yet. Back to the topic, you can now launch your VMs in headless and detached modes right from the GUI! Usually, when I launch a VM in normal way, the VM window just hangs there and is pretty annoying. I prefer to SSH to a running VM from a console instead of using the VM window. Now I can launch a VM in headless mode and it's business as usual. No extra windows, and I bet the memory toll on my machine is also smaller. When you click on start your VM, you no
Read more

January 03, 2020
Today, we’re going to explore CDC capability in CockroachDB Enterprise Edition using Minio object store as sink. To achieve this, we’re going to reuse the compose file from the first two tutorials and finally bring this to a close. Without further ado
Read more

December 24, 2019
This is my second post on creating a multi-service architecture with docker-compose. This is meant to be a learning exercise and typically docker-compose is used to set up a local development environment rather than a production-ready set up. I regularly, find myself building these environments to reproduce customer bugs. For a production-specific application, refer to your platform vendor documentation. At some later time, I will cover Kubernetes deployments that can be used as a stepping stone for a real-world application. Until then, let's focus on the task at hand. We're building a microservice architecture with CockroachDB writing changes in real-time to an S3 bucket in JSON format. S3 bucket is served by a service called Minio. It can act like an S3 appliance on premise or serve as a local gateway to your cloud storage. Let's dig in:
Read more